Musings of a Programmer: Vive Integration

Omni_Dev_Patrick Posts: 4
November 2015 edited December 2015 in VR Content Techniques
Hi everyone! I’m Patrick, game programmer on Team Omni. I worked on making the game mechanics and optimization of Training Ops including turrets, weapons, and, what I think is most interesting, player input from the Omni and Vive. Given our recent announcement and video of Vive support, I’m going to focus on the new features this lets us utilize in Training Ops and future projects.

Supporting the HTC Vive enhances our gameplay immensely. Previously, the combination of an Oculus DK2 and an Xbox gun controller required you to look where you wanted to aim; the gun was attached to your face inside VR like most standard first person shooters. With the Vive, we use the power of their tracked controllers to have player weapons completely decoupled from their face. You no longer have to look where you want to aim. The weapons are floating out in space where your hands are. Additionally, when Oculus’ next version of their headset comes out with tracked hand controllers as well, we hope to support them too.

Immediately after implementing the Vive, I noticed two things players needed. First, the rifle we normally have in Training Ops is not ideal for holding two controllers. I tried a variation of the rifle by having it attached to one controller and it would constantly look at where the other controller was located, but the effect just wasn’t there yet. From in-house testing, everyone wanted dual wielding. It made sense. You have two controllers in your hands, players want to be able to walk down a hallway, arms outstretched to either side shooting in both directions. 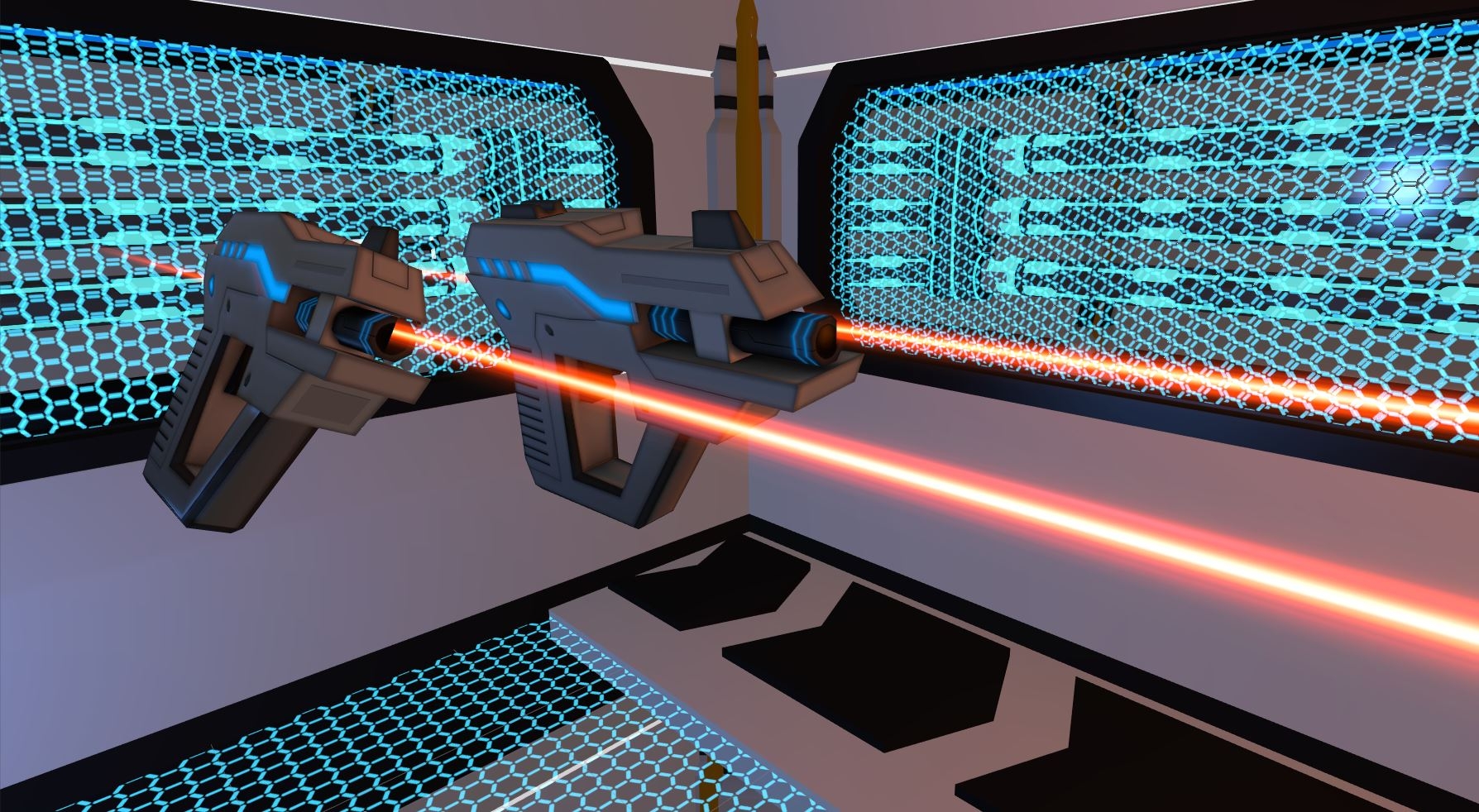 So, I gave them what they wanted. I added pistols and everyone had a blast. But I said there were two things I noticed players needed. The second thing was that the game was incredibly difficult now. Players are used to standard first person shooters where the direction the gun is shooting is from the center of the screen (where the reticule is). Now, the guns are shooting more so like real guns with projectiles firing from the ends of their barrels. Additionally, there is no longer any iron sights button. If a player was to aim down the sights they have to physically move the hand controller up to their eye in order to look down the sights.

So, I started adding some assistance while still trying to keep the challenge present and ensuring the player still felt powerful. The end result was large red laser sights that the player can easily line up with targets to quickly take them down while moving quickly on the Omni combined with large projectiles that can be easily followed so players can determine where the projectile hit and how to adjust their aim to their target.

The effect was very well received and everyone was charging through the levels of Training Ops with huge smiles on their face. I hope you get a chance to experience Training Ops with pistols, and keep following for more updates from us on the Game Content team.